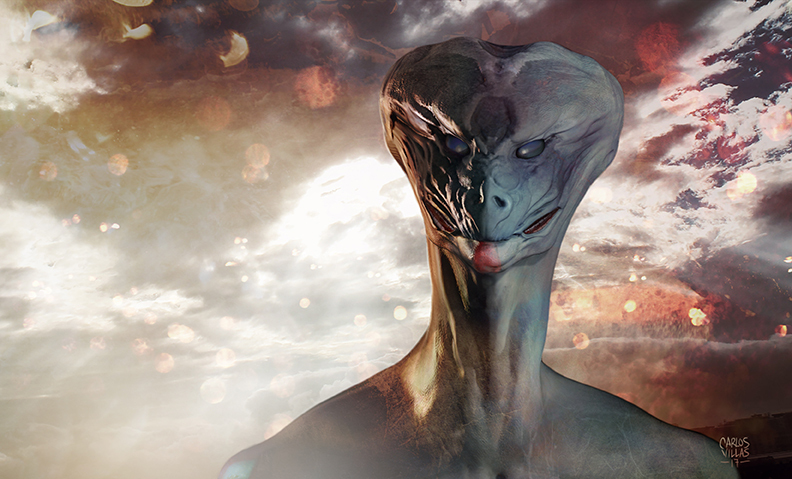 “But the UFO phenomenon simply does not behave like extraterrestrial visitors. It actually molds itself in order to fit a given culture.“

We are no strangers to the void of space. Here in Artlords, letting our imaginations soar as we take in the strange and the unique art that trickles in into the website. In this post, we explore the far reaches of the mind of both ourselves and these artists and in that embrace, something unique, something alien will take shape. Read on!

In the Moon of Io, water is scarce. The only liquid that boils up is the constant flow of magma.
It was quite a surprise to discover the Silvertail species of hounds at the heart of the many volcanos that dot the moon.
Their internal organs and guts are all made of magma itself, they feed into it as they drink from the flow of magma.
Their mercurial behaviour has only one consistency: A flaming passion for all things shiny.

The Long Necks are the ID the bureau has given to these beings.
In spite of a mouth and their intellect, they communicate exclusively through a sign language done by head movement.
They do not seem interested in humans, avoiding contact even when confronted by our presence. Their attention falls on our Earth seeds. They seem to collect them as their eyes well up. Is it sadness? Or perhaps hope?

The Shades of Mars are to be avoided by travellers who happen to travel in the night by foot in the red planet.
These Shades creep into your own shadow and their red eyes are all one can see. In the dreams of their hosts, a mirror world where their will and psyche are used to ferry the Shade into their day to day routine of strange and alien behaviours.
Only a Karmic surgery can unbind a shade from a human. And even then, the victim will forever dream of this mirror world, floating through it, without being able to do anything or feel anything until they wake up.

The barbaric Viper has no planet to call their own. Their conscious is close to the human one, except their carnivore tendencies and lizard brain seems to dominate how they operate.
For the Viper, there is no tomorrow. Only today. Only the now. When a Viper falls, its body is consumed by its peers. When it’s mating season, it’s a brutal fight between the alpha males and the most suitable females. Their technology is improvised, crude but surprisingly effective. If they need to reach the stars, then all their scientists pour all their limited knowledge into doing so. A race that has no vision for the future, for they are living with intensity.