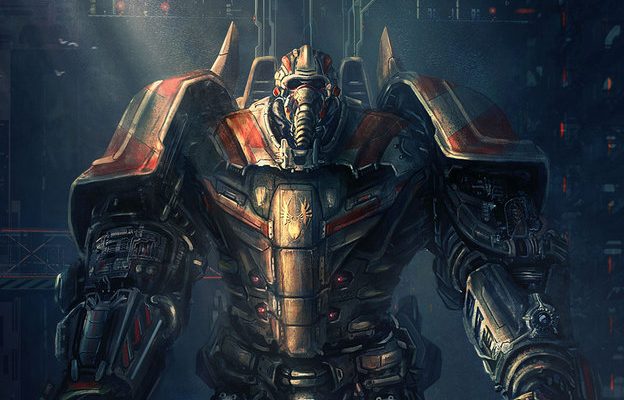 We’re pulling the curtains on the hundreds of stories that have already been submitted – inspired by the awe provoking art that our member artists upload everyday!

Today, we bring you a two-parter about a man who died inside a mech only to be reborn in the arms of his savior. It’s the Steel Titan series!

Ockbald wasn’t born in Maule, but a Lone Wolf mercenary like him might as well call it his home. The Silver-Haired regent that gave freedom to her people was a constant presence on his Mech’s monitor. The speeches about letting it be, living life to it’s fullest and growing a community through guts and a desire of better tomorrow gave him hope that the Inner Sphere was finally evolving to an utopia.

Somewhere in Mauve, a heavily modified Cargo Drop ship sees a massive mech in a jury-rigged repair bay.
This Titan of a machine has several parts painted in red,contrasting with it’s steel colored Duralex armor plates around the chassis.
Under this massive mechanical mountain there was one man barking order to several engineers working around the machine. He had a cybernetic prosthetic arm, a crude eye implant covered by his long and greasy dark hair. He was scratching his goatee as he examined further the mech. Suddenly, he turns his back towards a pudgy woman, who seems to be enthralled by a computer screen.

“Ebba! Stop wasting time! I asked for the list. Where is it?”

We hope you liked our Story Showcase. We’ll see you next time!

The Sixtar Series
Weekly Adventurers Around the Globe – Introduction
To Top