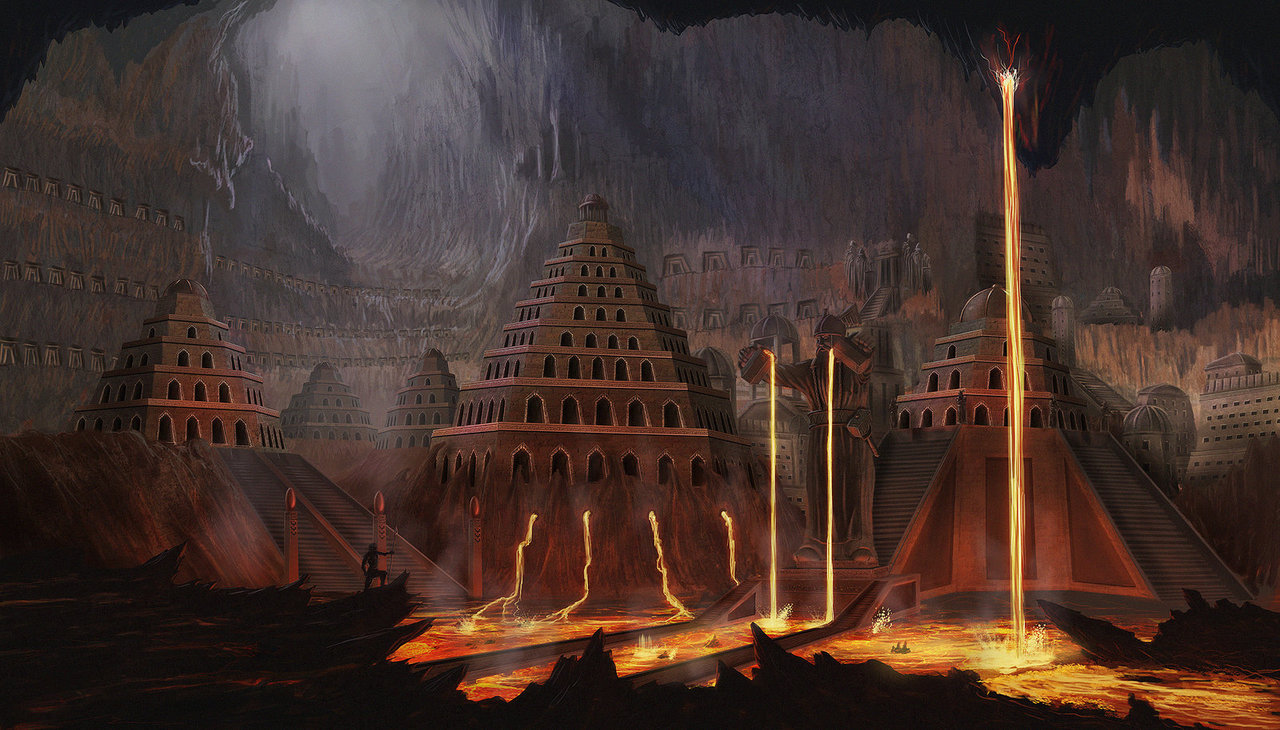 This Christmas, we bring you not one, not two, but three dungeon ideas!

Whenever you set up Dungeons & Dragons or any Fantasy game heavily inspired by the good old D&D, Dungeons are always in there, somewhere.
Not every classic fantasy adventure game ends with the player’s party conquering a series of caves or rooms, but it’s clearly part of the course, part of the game.
So allows us to present to you three Dungeon ideas based on three inspiring Digital Art pieces, shall we?

We will be using the Five Room Dungeon format for this post:
Entrance with Guardian
Puzzle or Roleplaying Challenge
Trick or Setback
Big Climax
Reward, Revelation

Siege of the Blessed Castle
In the deep underground, the castle of Lux Nobre is rumored to materialize once in a hundred years.
It is said this ancient kingdom was lost to the sands of time, cursed to return every solstice to play a reverie of a better past, to an undead population that still lives and functions as a mockery of society inside the Earth.
To allow these cursed souls to rest, the party must venture the Blessed Castle and end their hopeful dreams so the past can let it go.

Entrance with Guardian
Discovering where the Blessed Castle will materialize is easy, there is even a caravan of descendants of the Lux Nobre people who visit the road towards the castle every one hundred years. They don’t dare go further in due to the “Grateful Dead”. A group of zombies and ghouls who roam the castle town, trying to re-live their routines.
If the party wishes to reach the castle, they need to pass through that city first.

Most of the undead found in the city will avoid the adventuring party, for them, they see the group as undead monsters (as they see themselves as regular, still alive folk).
As the group approaches the Castle, set up an Ambush by a group of Undead, dressed in the garb of the church of the ancient order of Lux. They will hold over their heads holy symbols, trying to smite the party, in which they perceive as undead.

Nothing will happen, but the undead will attack the party all the same.
If they survive the onslaught, they may continue in towards Lux Nobre.

Puzzle or Roleplaying Challenge
As they enter the Castle, a golden golem will stop the party and implore them to return. The King’s curse is no curse, rather a blessing. His people can live forever inside a dream and in turn, he wakes once every one hundred years to check back to his life work. Will the party give the king it’s desire and turn back? Or will they free the souls of the King subjects from this mockery of life?

Trick or Setback
As the group explores the Castle, describe to the players that every room has two entrances. One is always moldy, grey and dirty. While the other is adorned by marble and gold, looking well maintained. Every entrance that has marble is an illusion, leading the party member who entered to take a six meter fall into spikes.
Big Climax

As the party approaches the throne room, the golden golem returns. This time, it melds itself with the beautiful and well-maintained scenery, destroying the illusion and becoming one with the decrepit castle, challenging the party as a giant golem hybrid.

Reward, Revelation
As the party destroys the golem, it’s body falls apart, to reveal a shriveled body with a glorious crown atop its head.
It seems the king was living inside the Castle’s caretaker all along. The curse of Lux Nobre was imposed by the king itself, who managed to power up a suit of holy armor every one hundred years to live yet again, for a limited time of course.

Attack of the Hungry Wurms
A small town has it crops ruined. Creatures, named by the villagers “Lesser Wurms” have been eating the harvest for a while now. Recently, however, the farmers themselves have gone missing. Rumors fly that a larger wurm seem to be behind this tragedy. The creature has been recently sighted in a dank cave, close to the village grounds.

Entrance with Guardian
The cavern is infested with lesser wurms! They attack the party right away.

Puzzle or Roleplaying Challenge
As they go deeper into the cave, the group finds two pathways. They converge into one pathway, however, the group needs to make a decision. The rightmost part is filled with the bodies of the farmers captured and partialy ate by the wurms. The village is sure to reward the party if they recover the corpse of their family and loved ones. It is filled to the brim with Lesser Wurms, so it will be a dangerous gamble. Meanwhile, the leftmost entrance is completely empty and easy to navigate.

Trick or Setback
When entering the main chamber, the party is immediately attacked by the Giant Wurm, who seems to be sentient, since it attacks the party member with the less HP in its cruel ambush attack!

Big Climax
Once the Giant Wurm is at half health, something unusual happens. It speaks! Well not in a language the player characters can understand anyway (Unless they speak Abyssal, that is). The creature is casting a horrible spell, that commands a large wave of lesser Wurms to aid it in combat!
Reward, Revelation

Reward, Revelation
Once the creature is slain, it body shrinks. The corpse now is of a man, a farmer, who has small worms escaping from it’s every orifice. Clearly someone who were trying to drive away the competition, but something went wrong and it’s monstruous form became a permanent one.

Assault on the Forge Fortress
The Sword that can kill worlds stirs. An entire fortress dedicated to forging artifacts of power is creating weaponry being used by roving bandits. An entire fief has been conquered by warriors clad in black armor, and the Baron wishes to hire a band of Adventurers to go into the said fortress and deliver some justice.

Entrance with Guardian
The heat from the magma will prove to be quite the guardian for the group. They will need to deal with how hot the place is as well how to navigate over stone plates atop of magma.

Puzzle or Roleplaying Challenge
When the party does get close to the Fortress, they are received by a group of men dressed in black armor. They state they only wish to talk, bring the party to the Forger. Their equipment is clearly adaptive to the heat, and they are quite tough customers. That said, they are very close to the Magma. One push might be enough. However, if the players turn violent, expect some all out war from the Forge Fortress.

Trick or Setback
If the players manage to reach the main room of the fortress, they are received by the Forger. A giant of a man, with his limbs, fused with metal. In spite of his overbearing appearance. He says that he has given up on the world above. Selling his equipment to the highest bidder. For he has finished his masterpiece. The Sword that can kill worlds. A weapon so sharp, it can cut down entire cities with one blow.
The Forge says that such a weapon should only be used once, by a hero.
The players are left to accept the Forger invite for a trial, or even to try to reach for the weapon by other means.

Big Climax
Accepting the challenge will pit the party with another adventuring party, who were there first. A battle for access to the blade.
If the players try to grab the blade by other means, the guards will be alerted and pursue them for the weapon.

Reward, Revelation
The Baron asked for the destruction of the Fortress. The players can use the weapon to destroy the entire fortress and be reward by the Baron. Or they could hang onto it, use for other means.
Remind them, the sword is a one shot. And it can only be used to destroy cities, settlements and the like.