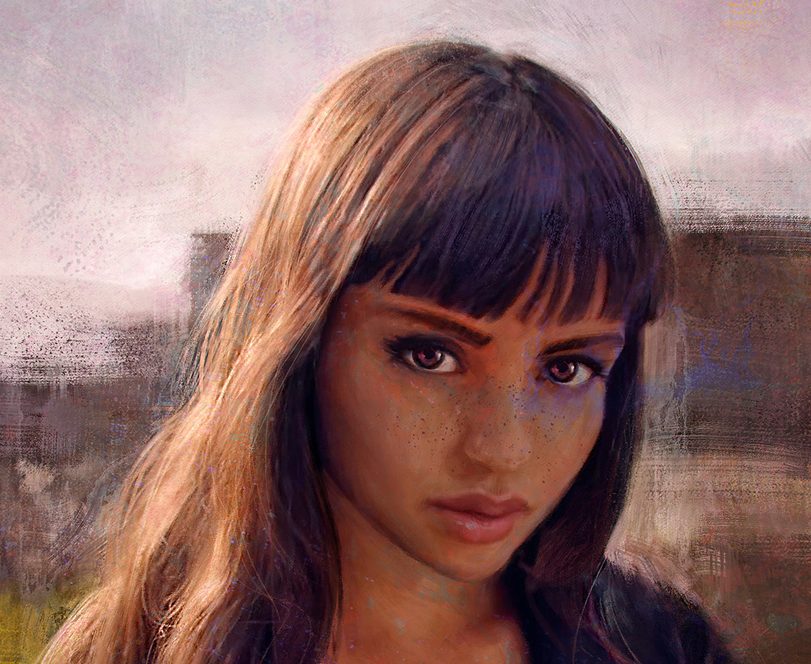 Yesterday I stumbled upon an older piece and was shocked to see from the data -time stamp that this must have been from year 2000 / 2001!

As mentioned in my first post, I´d like to critique myself…
With that in mind, I decided to think about what would I change today to achieve the same expression and look but more teasingly?

For tech geeks or people new to my work here are some technical aspects: This piece was created with Photoshop 7, I guess a 1,8 Ghz /512 mb Ram PC with an artpad 2 -graphic tablet from Wacom, my first tablet ever!

Except for the machine and tablet I work now on, the Photoshop version is still in use and after 9 years now of getting used to it – I still deny the overblown CS flagships (at this point a call to adobe: make better European prices and give people a tool that works, not just code that blows the hardware specs!)

But I won´t delve deeper into this “what programs to use” -type of discussion any further.
My main aim was to critique myself when viewing the picture above from an objective point of view:

The last one is indeed a very slap in the face, especially if it should represent a male character for example.

As far as I remember that time of the creation I was inspired by some works of Linda Bergkvist and it was trendy somehow to paint genderless characters.

But overall, this is part of my integrated rules of observation when going through artworks every day.
And this list isn´t complete, the 9 years that lies in between and the study has affected my view and appliance of these and other rules to a routine when working on either personal or commissioned pieces. (where in personal pieces experimenting and prototyping of new techniques were practiced a lot)

With that in mind, I pushed myself to work this piece over also to see if I could come up with a better result in ca. the same amount of time, and I guess I did:

I have worked inspired and referencing from a stockphoto from Ladymorgana,  which saved me a little time with the pose, the face is complete repainted to match the source and also i took the liberty to run wild with some gadget and tattoo -design stuff.

For the arm gear stuff I had lumped together some findings along with some clay, for reference but was too lazy to paint it bronze colored with airbrush like actually intended – so it would better fit within a “steampunk” kind of theme. But i suppose then i had to add some goggles also…

Well, I´m still not satisfied with some parts, but its possible that i revise them.
The main differences are clearly visible, more space to the edges = editors dream:) a clean background, smooth gradients and a simple yet working color scheme.

In the end another piece that fits nicely into the “Fantasio -girls” portfolio.

Comments are welcome, here or on DeviantArt.

If you like to hear a story from a specific image from my gallery, just let me know!