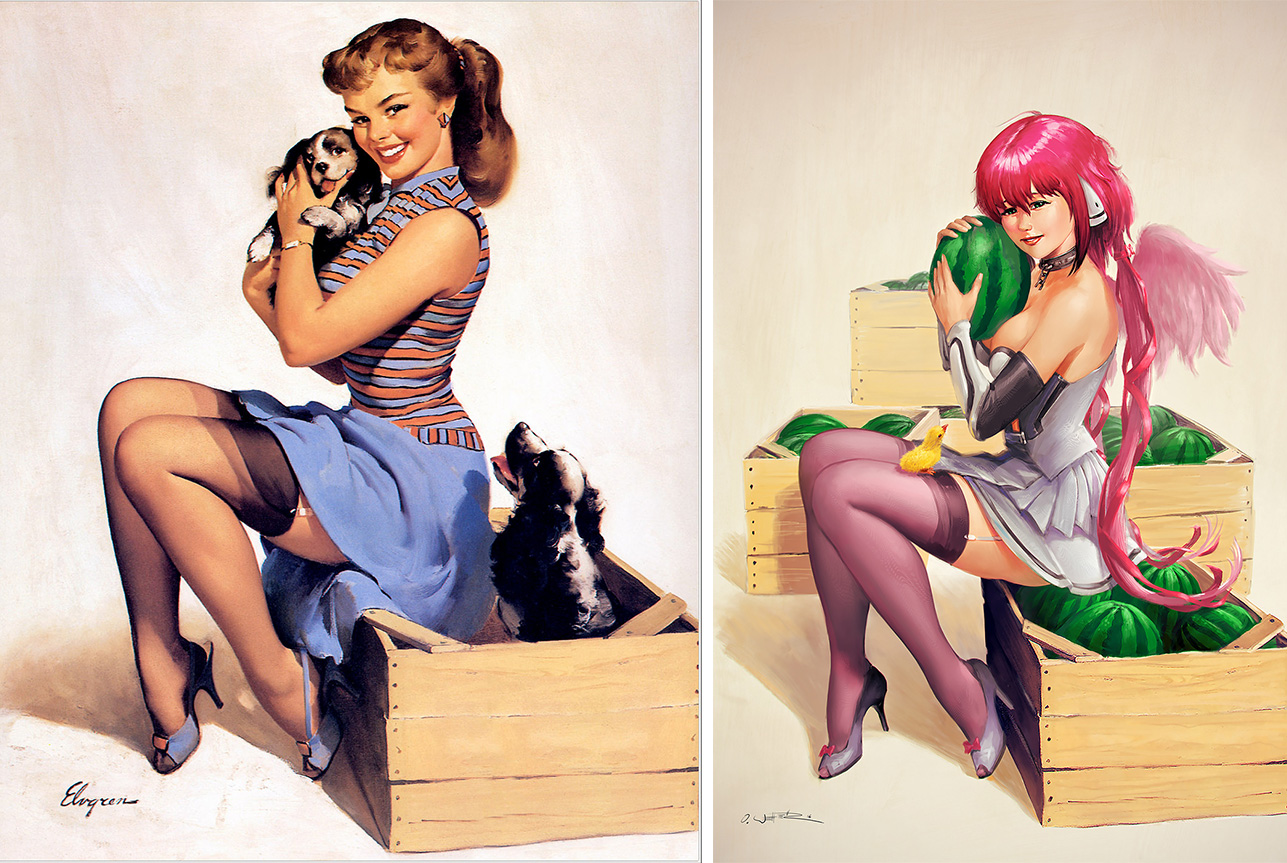 There are many art movements, Cubism, realism, etc, but what is Inceptionism?
Inceptionism is relatively young and a term coined by Google which refers to art that is generated by neural networks. These Neural networks actually create new works of “art” by using photographs or virtually any existing image as a source.
You can read more about that technology here: https://research.googleblog.com/2015/06...

As analog equivalent to that, I was doing “Hand painted Inceptionism” way before Google came up with that term, and I bet it will take at least 15 years for an artificial intelligence or neural network to combine ideas and style in a manner that you have a true “artwork” as a result.

So, I´m not saying I will go the artist VS. the machine route with this, but I will rather take this chance to show that true knowledge about art and the complexity of imagination can´t be outdone by a computer network – at any time soon. The thing is; a machine can only output what you feed it with, learning algorithms are already improving as we speak, but human creativity and imagination will always be superior to that of a machine because it is a lot more independent.

The real challenge is to create something new, something transformative, yet something greater in the sum than what the source already delivers.

There are also projects in the making to showcase how this technology could create another masterpiece of artists that are already dead, such as the “Next Rembrandt-Project“, but the result is utterly based on given data. What is missing, is the whole life of the artist and the decisions he made throughout his life to simulate this correctly. Machines can simulate a style or another work by predicting several things, but it might not ultimately be a replacement.

OK, what I mean with Inceptionism, when I refer to it, is actually “Hand-painted Inceptionism“.
This can be practiced by painting either into existing works what I want to see or copy the style and composition of an existing piece to create a new work based upon that.

Why doing that when you can create original works of art?

This question is very vital, and I asked this myself fairly enough, here´s the answer(s) I came up with:

With meaningful art, I rather mean the message or value of the problem-solving aspect the artist in question did. Below is a really current example, where I worked with the work of Sebastian Krueger to create a fan art double homage. Opposed to the graphic look, I went on and used lighting from above to create my values, where Krueger did use a very diffuse lighting to create a certain layer of abstraction and to add a more ghostly look. I tried to improve the composition where possible, the result is a dynamic image of the Joker that could even work as a comic cover by still paying homage to the source.

Even if the result is looking good or even great, what gives you the right to do that? Respect the artist!

Yepp, we all get that told – but the reality is, you respect the artists, I love them. Every bit of their work, if I could, I´d like to peel any layer from the canvas to see what is underneath…just kidding. But that is exactly what Austin Kleon stated in his talk”How to Steal like an artist“. As artists we are selective, but we all steal at one point or the other, the difference is in the way how you manage to transform the art.

Below are some more examples showcasing these techniques and the respective artists they come from. A first example is from the book cover work I mentioned, most notably, the work of:

Especially for the book cover illustrations, I did a lot more than these, either resembling Michael Sowaor Gerhard Glück. In the times I did these, I lost much of my fear because there was always a publisher between me and the other artists, who would settle with them in case it would be necessary – but that was never the case. Exactly the opposite happened; Gerhard Haderer complimented me with the first piece above, which was totally unexpected back then.

Something similar happened with the work on my Brom tributes, namely below:

After the second piece was released, I decided it would be better to let him know personally that I did these – and to my surprise he replied and even positive about the homage. That also shows me that Austin Kleon was right when he quoted that “Transformation is flattery“

The second manifestation of personal works with this kind of Inceptionism derives from the big inspiration that is Gil Elvgren. The pieces below are just an excerpt, you can find more in this interesting article: http://www.fantasio.info/2016/05...

The thing, however, that got it all started, was this series:

The Ancient Kaiju Project, was the jumpstart on this very technique before Google imagined as for how to even name their project. It is an unfair comparison because something like this could not have been painted from the deepest neural network – except they were fed with Ghibli movies and Pacific Rim;) …But wait a minute, that would be a very interesting result to see …

In filmmaking, this kind of reference is made quite often; Quentin Tarantino is a master of this craft and some people have figured out nearly every movie he cited covered in his films here.

Conclusion:
What did it teach me? Was the title just a teaser?
No, there is a huge takeaway from this. I can only speak personally about this, but what I learned was worth tons of money on education – money I would not have had. The thing is that it is OK to learn from masters, but so many picks the wrong masters. If you are good at technical design, the work of Hajime Sorayama could be a good direction for you, otherwise, it is a waste of time. I believe it is vital to study only from those who are closest to the style you want to be able to do perfectly. Why wanting to be the next Sorayama, if you would be a better next Brom?

The decision and epiphany of what would be the right direction for you comes over time. Time that many artists don´t give themselves. Too many throw the gun away too soon. Good for the others, but maybe bad for the cultural world.