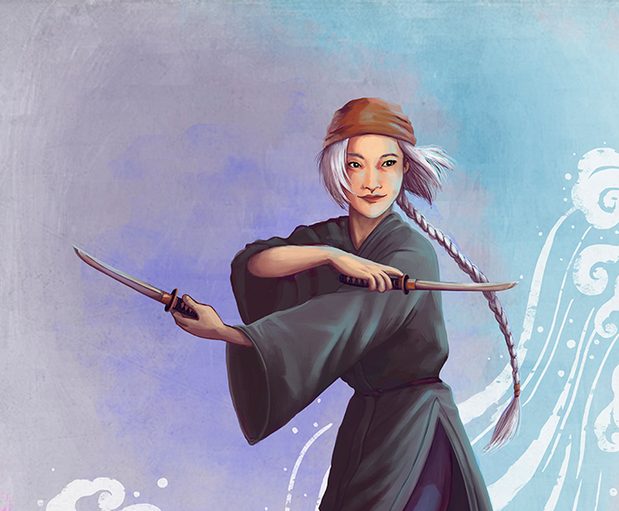 In the past, we discussed the new take on Legend of Five Rings Aesthetics.
Ever since that post when online, Fantasy Flight Games released a beta version of the RPG game we hoped to see in that post.
So a follow up is in order!

However, we are not here to discuss the beta itself. In fact, this post is all about why you should go out and try it for yourself. For we are looking to the past, to one campaign that made my RPG group fall in love with the setting, the system, and the fantasy.
This love even pushed a player to create artwork and improve her craft. And it is through this art we are going to take a plunge into this personal past, in hopes it kindles something in you.

The campaign began by running a version of the “Topaz Championship” adventure that I found over the (now defunct) AEG’s official Legend of five Rings forums. The premise was simple enough: A tournament that pits Samurai who just went through their gempukku (coming of age ceremony) or are about to in a dueling tournament that also tested other skills, from Tea Ceremony and common courtesy to Sumo wrestling. The first season saw the character of Aomane, the Crane Clan Samurai who gave up her honor to uncover a conspiration regarding a young and handsome Scorpion prisoner as the tournament raged on, a young Kitsune Kyubi (pictured above) having a vision about re-creating the Fox Clan as spiritual guardians as well Yogo Maya, a manipulative Scorpion Clan courtier who befriended the two out of sheer necessity to overcome one part of the competition. None of the players won the coveted “Topaz Champion” prize. Yet they all shined at one point thanks to the well-paced adventure.

With the “core” of the group all set and properly introduced into the game, something that had never happened before with me as a narrator was about to unfold.
It was a hot Sunday afternoon, and all players from our regular sessions came and went. The main drive of the story was Aomame and Maya dealing with the fallout of Aomane’s character becoming a masterless Samurai after daring to rescue the male Scorpion Clan Samurai from the tournament grounds. Over seven players in a span of 12 hours of miscellaneous adventure in Rokugan, the setting was rich and so easy to tie incidental events to larger ones.
The one pictured above, Kaneda, was a member of the Spider Clan. A crazed monk who loved making Samurai lose their duties to lust, one of the highlights of the campaign was when he seduced the heart of a young Crane princess causing all sort of mayhem, confusion, and distraction that allowed the party to investigate a certain cultist in the castle.

The abridged version of the story is the following:
– Young would be heroes partake in a tournament to crown the next champions of the realm
– They all do all right in said tournament, but sadly they do not win it.
– Aomane falls in love with a Scorpion Clan prisoner in the grounds of tournament, and through that love gives up her position in the Crane clan by running away with said prisoner
– Maya, the female Scorpion courtier takes her under her wing because said prisoner is her long lost brother!
– At first, Maya’s plan was to drop off the ronin and the runaway prisoner into the lands of the Sparrow Clan, except when they arrive there they discover the village is being besieged by terrible Shadowland creatures.
– They seem to follow the commands of one man – Maya’s father.
– By a miracle, Maya, Aomane and other playing characters manage to fight these creatures with an army of peasants from the Sparrow lands.
– Maya kills her own father, only to be haunted by his last words “In three years, the nameless one will return to claim this pathetic realm”.
– Cue the group journeying to Phoenix Clans lands, where they discover the true nature of the Nameless One, and how to defeat it.
– Along the way, the group befriends all sort of people, Aomame becomes friends to a justice-based ninja group while Kitsune Kyubi has it’s own journey of uniting ronins for his unofficial Fox Clan.
– These three years fly by, and just like that the Nameless One returns
– Thanks to an ancient ritual discovered in the Phoenix Clan Library, plus the alliance of Ronin, a whole Ninja village, at least two Ratling and Naga platoons, the party charges into the Nameless One’s amorphous form
– It’s a fateful clash. The ronin fall, then the ninja, then the naga. However, the Ratling manages to stand tall! The Nezumi defeat most of the enemy forces, allowing the party to face the Nameless One.
– Shiba Maasaki hits the nameless one with a single blow of his Katana, destroying the creature with a critical hit to remember the game by.

And since this game, all my group wants is more Legend of Five Rings.
Well so do I!

Let us hope Fantasy Flight Games’ take on the RPG allows for even more warm memories.