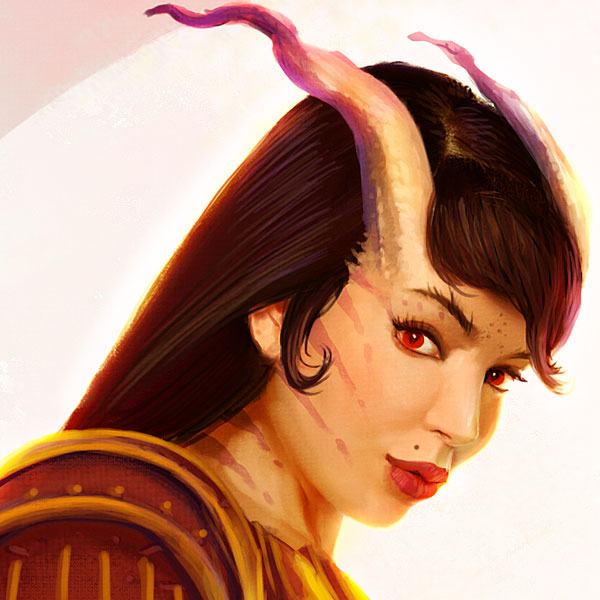 Since today is the final day for the D&D Pin-upchallenge over at ArtOrder, I decided to put the process on the blog.
I got my shiny new copy of Photoshop CS5 on Thursday and after setting up, it was such a motivation that it would be a pity, if I´d miss that chance to do a “Fantasio-girl” and a themed one too
OK, here we go that´s what I came up with, the new brush-engine in CS5 took a while in itself to get into, but overall this was done in about 2 days from idea, process to finish.
A lot has changed while working on the piece, so that´s the reason the sketch looks different than the final piece.
And yeah, the dragon should be a “pet” kinda size, but for any Pin-up fan this should come through… and pre-colored sketch:
Sketch:

All I had in mind and focused on was the pin-up like face and pose, something that would raise the “oops” character of a typical pin-up piece Vargas and Elvgren would be up to.

Converting such an idea into a modern and especially into a fantasy or D&D world is a tricky task, not impossible, but it’s important to keep in mind that the pin-ups originated in times when war was daily routine to give soldiers a fantasy while keeping it clean at the same time -a difficult task then and obviously today.

The idea with the Dragon pulling on a cord that keeps together her bra was rather a simple idea, but it worked. At least to fulfill the “pin-up” cliche.

The other benefit of such a genre is the simplification of the style and therefore the possibility to experiment with it. I tried to get the character and the landscape in a kind of watercolor/gouache type of style which I also like.

Below are some close-ups to show a little texture that reflects also the effort to make it look like watercolor on a linen or old paper.

Not that I´m too much into RPG´s, but Tieflings and Fauns are to me the most fascinating archetypes, especially when they are female;-)

The dragon is also completely painted freehand, no reference used, but it helped to have such a dragon modeled in clay a little time ago for another piece called Dragonwhisperer I used to paint one.
For more D&D inspired art, be it official or else, you can check another pro pieces here, click the image to check Wayne Reynold’s work: