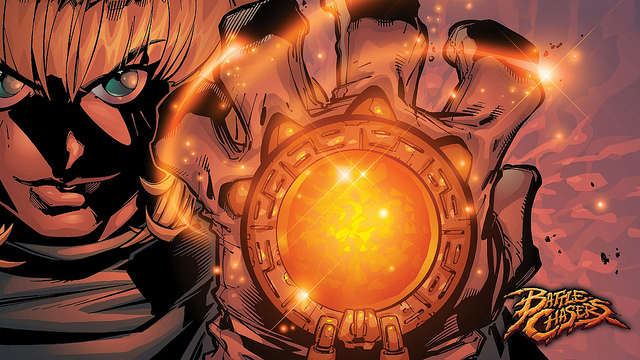 The Art of “Battle Chasers: Nightwar”

In april of 1998, a fantasy comic book hit the market:
Battle Chasers.
The 90’s was a wild time for comic books. Independent creators were rising up, the “comic book star” was born just as the “big two” marvel and dc comics kept pushing cover gimmicks to win the audience with “collector’s edition” – The so-called collector’s bubble was forming just as vibrant creators were cropping up.
It is true, however, that Image Comics the publishing house that published Joe Madureira’s Battle Chasers was not exempt from that collector’s bubble. If anything, it’s contractors were doing just the same. Not even Battle Chasers escaped this.

However, in the sea of big muscular men with cybernetic implants, time travelers holding big guns and cheap Wolverine clones, the Super Hero comics look with a touch of anime from Joe Madureira’s art, exciting setting and iconic characters made Battle Chasers stand out from the crowd of independent comics from the 90’s.
In this post, we will explore the art of Joe Madureira through the lens of the Battle Chasers comic book, finishing off with an appreciation of the impressive aesthetic of the game “Battle Chasers: Nightwar”.

Inkers are varied, with Joe Madureira only working as one in one issue of the original Battle Chasers run. However, since the series is his brainchild and the fact the way colors are used are mostly consistent, the vibrant anime/Superhero style jumps off the pages through its color decisions. (Click to expand)

If the name has not clued you in yet, “Battle Chasers” is an action-focused fantasy comic book that uses all tricks and tropes from Super Hero comics adapted to a different setting. Joe Madureira’s action art and melodramatic overreactions from their characters are the star of the projected we share below. (Click to expand)

Battle Chase: Nightwar is the most exposure the comic universe has had in a long while. In this series of concept art and interviews, we can see how the series evolved from it’s 90’s origins.

(For the full Nintendo UK interview, check it out here)

Joe Madureira: Battle Chasers was a comic book series that I created back in 1998. I did nine issues and then I actually got into the game industry, so that story was never finished. The series was so heavily influenced by anime and Japanese RPGs I was playing at that time, so when it came time to think about what this RPG was going to be, it seemed like a natural fit. The characters were already so inspired by games that they’d fit right in.

(For the full Gaming Tend interview, check it out here)

It’s been 16 years since your last issue of the Battle Chasers comic, which only spanned 9 issues. Are you concerned that the property might not resonate as well it did in 1998-2001?
[Joe Maduereira] It was a huge fear of mine, actually. To the point that I was resistant at first to the idea of making Nightwar a Battle Chasers game vs. developing a new IP from scratch. Our amazing support from Kickstarter backers, and positive word of mouth from people that have tried the beta helped me get over it though. Fingers crossed!!!

What has changed the most from the comic to the game?
[Joe Madureira] The heroes from the books are all playable in Nightwar, and some have had small updates made to their overall design. Partially to make them animation friendly, make sure they read well on screen when the camera is zoomed out, etc. The most notable changes were made for gameplay reasons. For instance, Bretto has healing abilities which he didn’t have in the comics, Garrison uses different swords, Gully gets upgrades to her legendary gauntlets. It doesn’t make a lot of sense from a lore standpoint, but was necessary to make the game fun.

The redesign of the characters was done to reflect their different context, animation and game sense was put forth as more important that follow the original comic book design, while still trying to bring out that feeling.
Explore the hard work on this redesign on the gallery below (click to expand for more information):

The Art of “Battle Chasers: Nightwar”