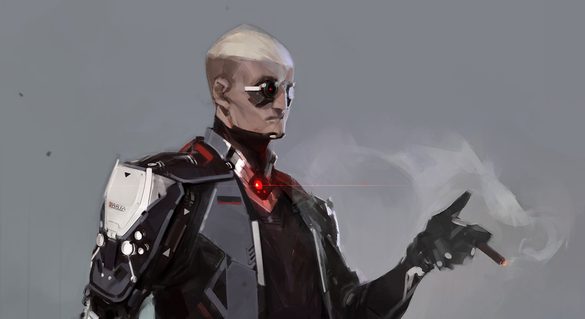 Last time we mentioned Shadowrun here in Artlords was to celebrate Shadowrun: Anarchy release with a character gallery to get you runners in the mood for the game.
That was in November of 2016, here in 2017 we wish to revisit the concept and explore four distinct character concepts for you to use as NPCs, PCs or just push you into being inspired by digital artwork to create cyberpunk characters. These concepts are all based on Berlin runners. A group that calls themselves “Alte Schule”.

Berlin was once an Anarchist dream come true.
Yet since in 2072 the dream was dead.
Where no power existed, now it spread like a contagious disease.
A relic of the chaotic past of the city, the figure is known only as “Vier” prowls the Berlin nights with his four cybernetic arms.
Selling them to the highest bidder, it was if this being hidden behind a gasmask trades his gruesome wet work for whatever freedom his cred stick can provide.
An unstable silent individual.

As a moral counterpoint of “Vier” there’s Otto “The Hammer” navigates this new era of Berlin as if the anarchism paradise never ended.
Every Nuyen he makes, part of it is given back to the runner society – As small, splintered and persecuted as it might be. In spite of his augmented limbs and hardass personality – Both things, he got when he worked for Müller-Schlüter Infotech as hired help – he is an idealist at heart. An old Dwarf trying to make sense of a world that has left him behind time and time again. A lonely soul that tries to bring happiness for those who still believe they can buy their freedom by paying their price in the shadows.

Adalbert Helbrandt was a wage slave for the GIAT Industries (a subsidiary for Saeder-Krupp) who looked towards the Berlin community when he was younger, wilder. He would play a dangerous game, selling armaments for runners while keeping tabs in potential dangers for GIAT. With the change of structure, his presence as GIAT supporter was not needed anymore in Berlin. He was demoted, his hard work laundering Nuyen to his masters was ignored, struck down as nothing more than his own responsibility. Angered by this, Adalbert quit his day job and embrace his vices, just another faceless Runner in the cracks of this fractured Berlin. His contacts and shrewd business acumen is what guides him to his misguided rebellion. He is having too much fun to care about the consequences.

Rohan the Guru of Song is the brains behind ‘Alte Schule’ – Even if Adalbert is the face and the voice for the group of relatively old Runners. He immigrated to Berlin in search of his own personal ‘Shangri-la’, his magical music gave him a happy and long life. Until the powers that be took over Berlin.
Now, his flute carries a more melancholy tone as he fights for voices in the streets. Always running in the shadows. He seems to have a end goal – Create a new ‘Shangri-la’ somewhere in the heart of the new corporate Berlin.