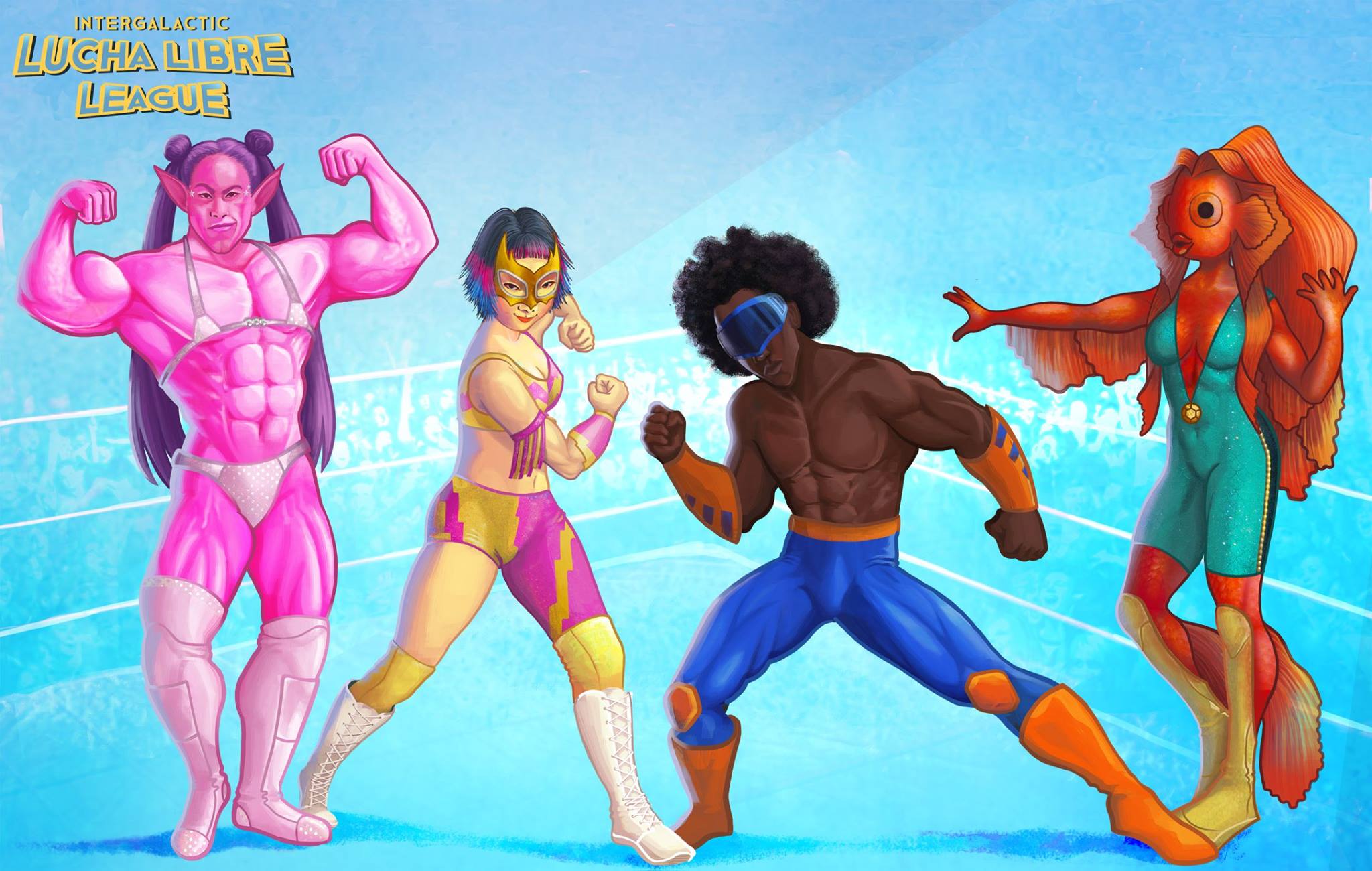 This time, this editor is more than just showcasing art from a far removed position.
We are to explore the comedic and over the top RPG game “Intergalactic Lucha Libre League” (“ILLL”) created by yours truly. I wish to showcase for people curious to how the art freelancing job works, as well the logic and care that went to design the characters that dot the landscape of the book, as well what was the technical process to craft the art for it.

Two of the artists who will be showcased today are part of our community, Daniele Cruz and Tiago Silverio.

Daniele Style tends to be more colorful, with an emphasis on showcasing the character design in a bright manner.

As for Tiago, his subject manner is all over the place, from cowboys to flying whales. But his realistic consistency is what got him a job illustrating for Onyx Path among other RPG companies.

To properly understand the aesthetic decisions behind ILLL, one must hear what the artists have to say about their work. They were the main stars for this project, the interest of the public in gaming conventions steam directly from the art, it is how the book manages to attract interest as time rolls on.

Regarding the cover, with Tiago Silverio:

Artlords: You are known among tabletop RPG circles because of your work for Onyx Path. They are known for their ‘World of Darkness’ setting, so what were the challenges when drawing something as colorful and strange as Super Powered wrestlers in space?

Tiago Silverio: Actually my personal art style is closer to ILLL’s cover to what you’d expect from my work over Onyx Path. I’ve always had more references from companies that demand a more fantastic edge on their work, like Wizards of the Coast and Paizo. In spite of my own personal taste target to fantasy settings, I do have an interest on Onyx Path’s World of Darkness. Every new pice is a new challenge, I try to put myself on the setting, trying to figure out how things work on the world I am about to draw.

Artlords: How was your process to come up with the design for the two characters on the cover?

Tiago Silverio: In all of my new illustrations that demand a concept for either a character or a background I tend to follow the same process. First, I search for references, creating a ‘work area’ of pieces from other artists as well photographs. This first step allows me to generate a concept in which I will work on top for the entire process. After that, it’s time for sketching and thumbnailing, searching from different possible compositions for the piece. Then, the best sketch is chosen by the art director. Afterward, it’s time to get technical, giving shape, applying colors, adding volumes, light sources and shadows. For this cover, I had a very well defined briefing, was just a matter of picking and choosing references and go work with the process.

Artlords: And how about the composition? Why this pose in particular?

Tiago Silverio: The briefing told me how the scene should look. Everything was well detailed there, so it wasn’t hard to find a proper composition for it. I tried to put the Luchador as the focus as he jumps towards the creature, as well to showcase the wrestling ring location in a space station.

Artlords: How long took you to create the cover? Were there any difficulties?

Artlords: Any advice for aspiring artists out there who wish to work for RPG companies?

Tiago Silverio: Working with illustration for RPGs is fantastic because the artist has the freedom to be creative and fly high. The advice I have is to practice your creativity as well your techniques and take a chance.

Regarding the interior art, with Daniele Cruz.

Artlords: You are a new comer to the world of international Illustrations, before of this project you worked only locally. What are your plans for the future?

Daniele Cruz: I will focus on making my art better while being more present in the illustration industry. I grew up on video games and animation so I do have a dream on working in said areas. And said dream became even brighter once I graduated from college, working on a 2d PC game with an Age of Exploration based on Brazil as a theme. When I entered the industry, I worked on a Brazilian mobile company, however now I feel more safe working as a freelance artist.

Artlords: Looking back now, what was your inspiration for the character designs for Intergalactic Lucha Libre League?

Daniele Cruz: When I am doing my work I’ve discovered that the best way to get inspired and motivated is to dive deep into the universe I am about to illustrate. Not just doing research, but feeling the tone and it’s textures. Regarding ILLL in this prospect, I wasn’t familiarized with Wrestling so my immersion came from me watching several shows from different parts of the world and from different eras so I could note cultural differences and how wrestling evolved and changed over the years. I also searched for references in the world animation with Kick-heart, Kinnikuman, and Tiger Mask as well 70’s Mexican Lucha Libre comic books. I really did not expect to learn so much culture from wrestling! It’s quite the universe, a rich one at that since each culture has its own style, its own aesthetic. I wish I could’ve done even more, in particular, some South American wrestlers.

Each wrestler plays a specific character inside the ring which is fascinating to watch as a character designer. I love drawing different ethnicities but I also couldn’t rely on that alone. It was a challenge to draw men and women with different body types while also selling a heroic, ‘muscular’ look. I had to train my anatomy and observation skills. But since it’s wrestling and I enjoy to goof around, I could also exaggerate certain characteristics.

These conceptual references allowed me to give each example character more personality. For instance, Violence Sakura is based on the ‘Joshi’ Japanese style, which currently is been dominated by asymmetry and contrasting loud colors. Japan’s garbage matches are violent and they even bleed in the ring! The Mussel example character, Peixosa, has more symmetric and glamorous designs found in modern American female wrestlers. All characters are done to be funny, colorful, yet still tough looking and that’s my personal touch.

Daniele Cruz: Every character had reference studies made to properly reach their final look. For the Mussels, I studied many different Fish species, their fins, and their color paletes. For the Plutomen, I studied Crystal formations and how light works when projected over them. I feel the Plutomen were my poorest work, I wish I had more time to work on them. I really wanted to explore different shapes for the Plutomen! I wouldn’t call them the easiest but the ones who flow quicker were the Earth Humans since I could use direct references from real life even if they are highly exagerated and colorful. The hardest to create were the Muscle-Elves. I had some anatomy knowledge but I’ve never drawn someone as muscular as them. It was quite the challenge to get the correct proportion. And beyond that, as a gag, the male and female Muscle-Elves had to look near identical, so I had to create a physical personality for both characters.

Artlords: How was your illustration process?

Daniele Cruz: As stated before, I used tons of references and worked on drafts until I found a silhouette that worked while keeping simple designs with striking, iconic colors. Clearly grabbing a page of the Silver Age of comic book Super Heroes. This style is perfect to illustrate the fantastic aspects often associated with wrestling.

Artlords: Do you have any advice for artists who wish to work for Tabletop RPG companies?

Daniele Cruz: First, you need to play! Play a lot! Playing RPG is a great creative exercise for the creation of characters and universes! It also gives you a familiarity with the dynamic of gaming as well the audience that said companies are looking for. However, I urge you to study the world too, not just RPGs so you can have more human and live references. And never abandon your own personality, your own style, even if you base it from someone or somewhere else.