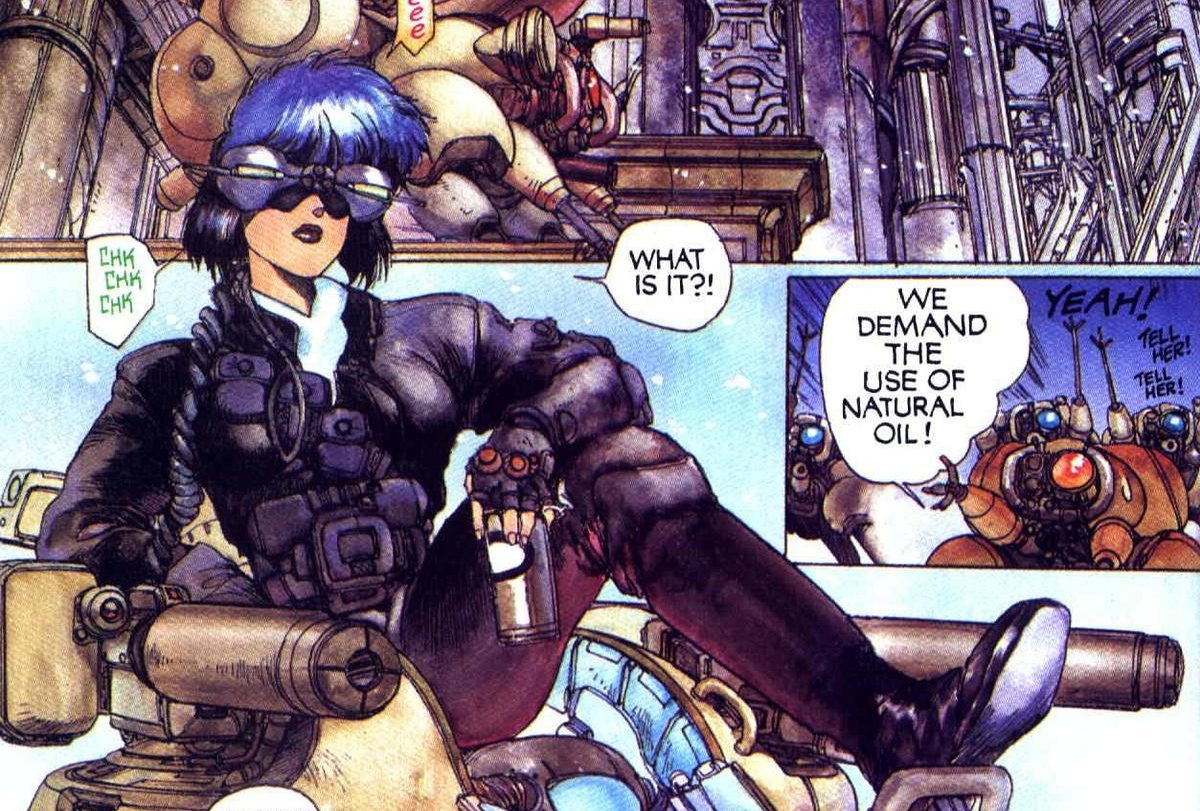 The Art of “Ghost in the Shell”

“When I was a child, my speech, feelings, and thinking were all those of a child. Now that I am a man, I have no more use for childish ways.”

One could argue that Ghost in the Shell was an international phenomenon due to its theme and art alone.
And by that I mean this on the most superficial levels: “Bad ass cyborg chick kicks some ass in a very well animated movie” would be enough to please me and any animation lover right? We are an easy crowd to please when it comes to aesthetic and motion.
But Mamoru Oshii‘s masterpiece is more than just a fun animated movie. To the point that opening statement would probably throw off some people reading this post, itching to get into the art we are about to delve deep from different parts of the franchise. Its influence is undeniable and ubiquitous, I could bother listing the Matrix, and all the other cyberpunkesque movies, comics, cartoons and animations that dealt with the theme of identity in a society with androids, cyborgs and beyond.

Instead, let’s talk about the aesthetic first created by Masamune Shirow and then adapted into the original movie (the one that truly made the franchise reach the mainstream, not to discredit the runs the manga had in America, around the world the movie was what made people aware, while in certain parts the manga was already a cult classic before the movie even hit the shores), the anime series and finally, the live action movie.

The reason why we must do this is that each version should be though individually. Because they all stand alone. They all have some quality unique to them while having its own flaws. This is just perfect for a series that bubbled up to the Mainstream with a movie all about the struggle of identity in a cyberpunk world, no? These are bites and pieces from the multimedia empire that is Ghost in the Shell, handipicked by yours truly.

Masamune Shirow and the Original Manga

Shirow is often called a “recluse author”, very few interviews with him in person were conducted. Our particular favorite interview is the one conducted between Frederik L. Schodt, the translator for the original manga created by Masamune Shirow. Some of our favorite bits:

Frederik: You have lots of robots– such as “Landmates” and “Fuchikomas”– in your manga. Where does your own interest in robots come from, and does your reputed interest in spiders have anything to do with your robot designs?

Shirow: I don’t know why, but the heroes Japanese children first identify with in manga and animation all seem to be robots. This is true of characters like Doraemon or Arare-chan, and many others. As a result, most people have implanted in their heads the idea that robots are all-powerful friends or pals. And that’s probably reflected in my manga. Also, if you go to factories in Japan today, the workers are almost all robots and this has a big impact on people, too.

If my robots look like spiders, it’s probably just because I like spiders. It’s also related, though, to the fact that until recently, until Honda developed its bipedal robot, bipeds were regarded as fundamentally unstable, and it was thought that the more legs, the more stable the structure, so most robots had at least four or six legs.

I used to spend quite a bit of time observing spiders. I was particularly fascinated by what we call “fly-catchers”– the “jumping spiders.” These are prowlers that don’t weave webs. They’re like robots. They may be thinking, but they’re life forms close to being robots with a goal programmed into them. They have a purpose. They carefully observe things, timing their attack. They seem quite intelligent.

Frederik: Do you think mankind will be able to cope with all the new technologies in the future?

Shirow: I hope so. We all need to try to make sure that happens. If we do want technology to be useful for all mankind in the future, though, we’ll need to do something about the growing gap between the rich and the poor. We’ll probably need to create some sort of compassionate capitalism that has more social guarantees built into it, or else the worst part of capitalism– where the strong always triumph over the weak and the income gap widens– will just get worse. I’m not saying we should go back to socialism, just that we probably will need something in between, something with more balance. It’s something I’d like to see the experts get to work on, and of course [ironic laugh] it’s something we as individuals should all be thinking about seriously, too…

In this interview with Dark Horse (the American publisher who brought the Ghost in the Shell manga to the Western audiences) we can uncover some of his art techniques:
Dark Horse: Some of your color work includes very unusual textures. How do you achieve these effects?

SHIROW: I use a color copy machine and copy rock or metallic images onto a “transparent film with an adhesive on one side,” (reversing or flipping positive and negative images, altering colors, and changing sizes), and then cut and paste them into the drawing. I usually use acrylic paint and apply several thin layers… I avoid a high contrast look with sketches, because when I draw very realistically the flat, deformed, and unrealistic-looking” faces of my characters tend to dissolve into the surroundings there and appear odd.

Is there anything we can even add to this discussion at this point? The 1995 animated film “Ghost in the Shell” is a must watch for anyone who cares about either the cyberpunk genre, animation or just good movies overall. Mamoru Oshii was already a veteran of the animation industry when he directed Ghost in the Shell, but did you know that the animation Key Frames created for the tank battle climax was created by another veteran, War in the Pocket animator Mitsuo Iso? Instead of showing you concept art or some high-quality screens, instead, let’s appreciate the craft of this one specific animator. The whole post would be about this one piece of media in the Ghost in the Shell pantheon if we were to bask in the awesome art that is in the 95 movie for too long. Even good things in life are better in moderation. Now out with the stalling and in with the tank battle keyframes!
(Click to see the full pictures)

While the game is more obscure than it should, the aesthetic used seems to be a middle point between Shirow’s style to the one used in the movie. The focus on Fuchikoma is a charm point that makes the gameplay even more special, in particular, if you are a fan more familiar with the movie in which the Fuchikoma is downplayed. Anyway, here’s our curated picks from the game’s artbook:
(Click to see the full pictures)

The name says what all the other media does. It stands alone, apart from any other piece of the series. Just like the movie, the character design is heavily inspired by Masamune Shirow’s manga, yet it deviates enough for it to be considered its own thing. The artbooks (Season 1, Season 2) for this particular animation are fairly in depth and a must in any Ghost in the Shell fan intor they go in great detail about the production process, the themes explored in the show as well the design process for the characters. We will focus on the last one for it not only showcases the struggles the artists when through trying to make it “stand alone” from the rest of the series, it puts a nice shade and comparison with the movie and the manga.
(Click to see the full pictures)

We won’t dwell in the casting controversy nor will we make an analysis of the movie. What we know and care is that many western artists were contracted to do work on the special effects, concept art and design. And regardless of the final product or if you enjoyed the movie or not, these artists were tasked to add something to the Ghost in the Shell mythos. As we are going to see, Maciej Kuciara (one of the said artists) was a huge fan of the series. How huge you ask?
He was the CG artist for this amazing fan project.

Finally, we reached the appex of this wild art into Shirow’s (and many other people) masterpiece. What a better way to end it with some fanart created by pros? Sign up to receive news about our next “Art Of” series if you enjoyed this one, there’s plenty more where this came from.
(Click to see the full pictures)

The Art of “Ghost in the Shell”

Why Lying To Yourself Is More Powerful Than Belief
Freelancing Zen: Harnessing The Power of Suggestion
To Top