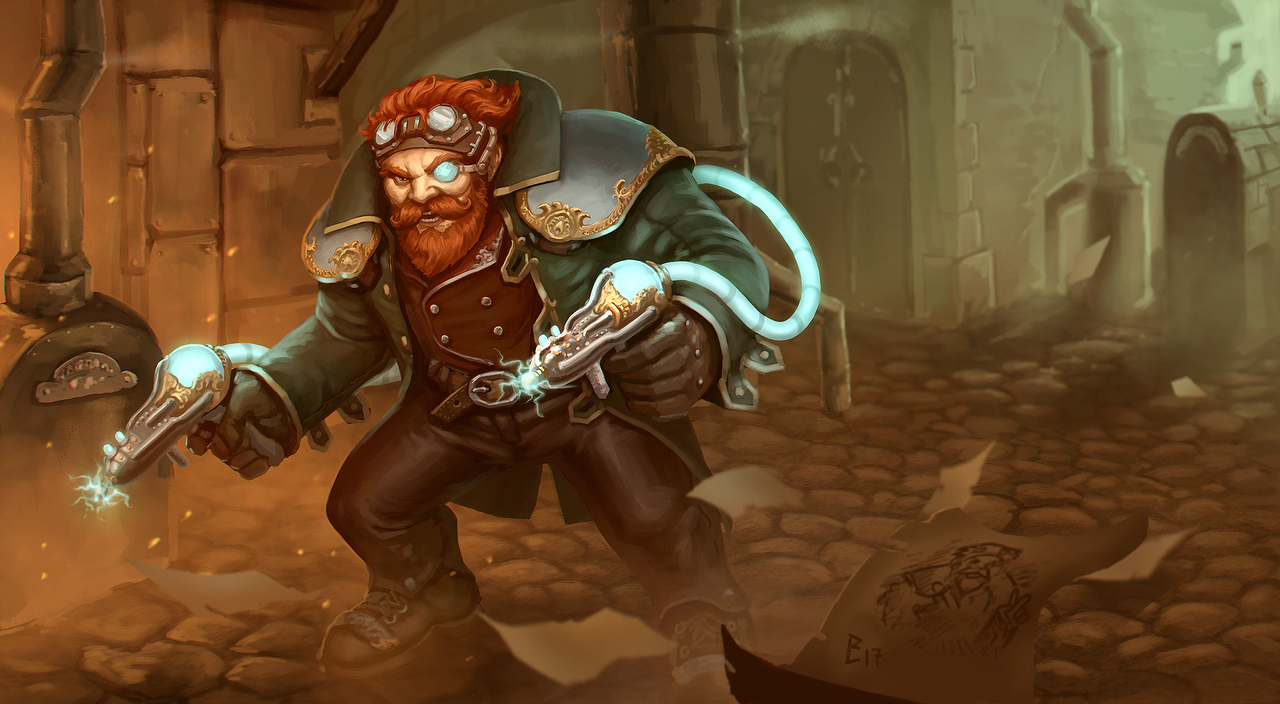 Dungeons & Dragons is one of our favorite subjects here in Artlords. Can you blame us when it inspires so much great art? Either way, we recently had quite the gauntlet with several posts dedicated to inspiring players and game masters with some top notch artwork to be used as character portraits. In this post, we share 3 pieces of art that inspired us to create 3 character concepts, ready for play. We will be sharing their starting class and a simple background, just for the fun of it. And here they are:

Name: Harmstead Bruttenbor
Class: Artificer (Gunsmith)
Race: Dwarf
Alignment: True Neutral
Background: Harmstead was in inventor in his Dwarven kingdom. An eccentric who often lost himself in books, he was a recluse on his own town. One day, he emerged from his laboratory holding a pair of guns, the “Harm Stingers”, a way to zap the goblin problem away. The Dwarven elders saw his invention as a way to lazily deal with a problem the Guards of said town trained every day to deal. A mockery of their vigilance. Harmstead was so angry that his tool was misunderstood, he took his best clothes, his Stingers and left. He will show them, he will show everyone his brilliance can protect everyone.

Name: Humming Wind
Class: Druid (Circle of the Land)
Race: Kenku
Alignment: Chaotic Good
Background: Humming Wind was a trouble maker on her youth, part of a flock of Kenku gangers who stole and mugged people in one of the largest city-states of the land. One fateful evening, after a wave of violence, the group was captured by the city guard. Wind managed to escape, and the leader of the group only shouted “Run” to the young Kenku. The poor creature ran as far and as quickly as it could. Before it could realize, she was lost in the middle of a swamp. She began to cry, fearing her demise. But a kind spirit of mud and poison embraced it. The Ghost of the Swamp adopted Humming Wind, taught her how to live from the land. After many happy years in her new home, she emerges from it, ready to give back to the world as well discover what happened to her flock.

Name: Karn the Seeker
Class: Warlock (Fiend Pact)
Race: Orc
Alignment: Lawful Neutral
Background: Karn was a weak young Orc. He was bullied, he was the butt of every joke. “Little Karn can’t even lift Big Axe!” was what they said. Every Orc around him was self serving, they only followed the chief of the tribe because he would beat them up if they ever dared to question his leadership. Karn hated himself. But one day, he met a new friend. The Red One. In his dreams, a river of blood red water dared him to leave his old life behind. To murder his way into a brave new world, of Red and passion. Karn chopped every single Orc who dared to laugh at him on their sleep.
His skin turned red. Terrible husks sprouted forth. And he felt a surge of power. The Red One promised him, even more, power if he kept the blood flowing. As long he followed Red’s rules, he could do whatever he wants, whenever he wants. Surprinsly, Karn decided to hunt bandits instead of slaughtering innocents. He saw his old self in the humans and elves being robbed in the roads of the civilized kingdoms. All these bullies were just meat, just red things that need to be collected to his personal god.

If you wish to join in the fun, check our character portrait galleries:

For even more D&D, our favorite classes are here. And yes we like’em all. Hell, we are missing the psion (now Mystic) in there, it’s my current favorite. Check the class here.
Finally, for some setting ideas, check Yong Hui’s setting pitch here.

The 101 Guide To Digital Painting Hardware #2 The “Workstation”
Artbook Review: Infected By Art Issue #1
To Top